It happens to people who think it could never happen to them.

END_OF_DOCUMENT_TOKEN_TO_BE_REPLACED

Photo: Well prepared kayakers in the River Thames. Photo is for illustrative purposes only and not involved or related to anyone within the article.

The following article by Moulton Avery was originally published in Paddler ezine, and is shared by permission.

Picture a mother struggling to bear an incomprehensible loss. Her husband and children are dead - victims of a kayaking accident that left her as the sole survivor. Who would be heartless enough to look her in the eye and tell her how stupid, how irresponsible, how reckless they were to go kayaking on that day, at that location, in those conditions.

Yet that’s precisely what many paddlers do on the internet in the aftermath of a tragedy, thoughtlessly hurling Darwin Awards in language that’s both insulting and gratuitously cruel. Is that the kind of culture we want to embrace in paddlesports – one that leaps to shaming and blaming fellow paddlers who are the victims of some unspeakable tragedy? Is that the kind of people we are? And if not, why do so many of us tolerate that sort of behaviour?

I’ve studied outdoor accidents for decades, and there’s a big difference between impartially analyzing an incident in search of lessons to be learned as opposed to personally attacking the victims for getting into unexpected trouble. Using terms like ‘reckless’, ‘irresponsible’, ‘negligent’, or worse does not contribute anything to either the paddling community or to future safety.

On October 7th, 2011, five experienced, safety-conscious paddlers went on a downwind surf-ski run on Lake Mille Lacs in Minnesota that ended in the tragic death of Todd Ellison.

The air temperature was 77F (25C) and the water temperature was 60F (15C). All the paddlers were dressed for immersion. Prior to launching, the group had discussed the possibility of splitting up and they did so midway through the downwind run, with three in one group and two in the other. John Ambrahms, one of the strongest paddlers, remained partnered with Ellison, while the others, who were moving faster, surfed ahead.

At that point a minor error occurred. Although the group as a whole had three VHF radios and four cell phones, the only communication device that Ellison and Ambrahms had was Ellison’s cell phone, which was in a storage compartment on his ski.

When Ellison capsized 2.5 miles (4 km) from shore in rough, shoal water, the Velcro portion of the ankle leash tethering him to his ski broke, and his boat blew away, taking their only means of communication with it. Towing Ellison proved useless and shortly thereafter, by mutual agreement, Ambrahms took off on a desperate 45-minute race to shore, in breaking beam seas, to get help. He was successful and the search commenced shortly thereafter.

It was too windy for a helicopter, so a fixed-wing aircraft was used to fly a search pattern augmented by multiple boats on the water. They searched in the general area of the capsize for five hours without finding Ellison.When the search resumed the following morning, he was found floating dead in the water about a mile from where he had capsized the previous afternoon.

Two years ago, I received a letter from Zach Handler, one of the paddlers in that group. It heightened my awareness of the lingering damage that thoughtless comments can have, long after the incident is forgotten by most paddlers. He wrote:

In the months after Todd’s death, there was a lot of commentary online, much of it quite negative of course. This came from two groups: one was lay people who thought we were crazy to be out there in the first place and got what we deserved. The other highly critical group were sea kayakers who disagree with surf-skiers’ minimalist approach to equipment. Some of the sea kayakers were clearly enjoying the fact that our tragedy gave them the opportunity to have an, ‘I told you so’ moment.

John Ambrahms, the paddler that had to abandon Todd in the water, never recovered. He always felt responsible. He kept Todd’s boat in his garage and looked at it every day. He shot himself on the edge of Lake Superior at his favourite paddling spot. That was a couple years ago. The rest of us are still best of friends. We paddle often. Most years we paddle across Mille Lacs on the anniversary of Todd’s death, both as a tribute to his life and as a way to make sure we are dealing with our own demons from that day.

Those two paragraphs should give anyone pause about making – or tolerating insensitive comments online. In the aftermath of tragedies such as this one, we need to remember our shared humanity as paddlers and be cautious, humble, and non-judgmental in our choice of words. Our aim should be to learn from the mistakes of others without adding to their misery.

Every week of the year, a steady stream of incidents roll across my desk and the most heartbreaking ones have dozens of associated news reports. Part of my job involves investigating paddlesports incidents and over the years, it’s given me a very keen sense of the tremendous pressure that reporters are under to get a story out – even though all the facts are not yet readily available.

As a result, many stories – and particularly the early ones – may contain inaccuracies about the weather, the conditions, the time of day, the type of boat involved and even the location of the incident itself. Ironically, many of the most unpleasant internet comments that I run across are based on this type of misinformation – which is seized upon by armchair critics.
Likewise, what does it mean to say that someone, “Should have known better,” when it’s clear that they didn’t know any better? Many hazards aren’t at all obvious and it’s worth remembering that we all began our sport at the bottom of the knowledge pyramid, knowing very little.

News reports frequently characterize novice paddlers as experienced. But ‘experience’ is contextual. One hundred uneventful outings on a familiar local lake confers familiarity and complacency, not depth of knowledge.

None of us are immune from making mistakes and errors in judgment and the safety hurdle faced by many paddlers is that they don’t have enough knowledge or experience to imagine the many things that can go wrong on even a modest outing. They aren’t helped in this regard by the many manufacturers, retailers and paddling publications that minimize hazards and sell the sport as a carefree activity that carries less risk than it does.

But paddling isn’t a risk-free activity, and the unsettling truth about decision making is that rational, clear, impartial, error-free, Mr. Spock-logical-type-thinking is the exception rather than the rule in life. We’re just not very good at it. In fact, we make mistakes and unwise decisions all the time.

We misplace car keys, TV remotes and cell phones, don’t remember to back up files and return calls, forget to buy things at the grocery store, underestimate how long something is going to take, overestimate our skills and physical abilities, commit errors while driving to the put-in and do all sorts of things that have the potential to come back, in one way or another, to bite us in the backside. We seldom take notice, because more often than not the stakes are so low that being wrong makes no appreciable difference to our daily lives.

We paddle to have fun, and often to experience a little excitement – or a lot – but none of us plans to wind up in a life or death situation. Tragedy always comes as a big, unpleasant surprise – to both victims and survivors.

SHOOTING VS. PRAISING THE MESSENGER

In many sports, accident reviews are routine, and the whole community benefits when those involved have the courage to admit their mistakes so that lessons can be learned. Whether our mistakes are large or small, it’s never easy to own them, and if we tolerate a mean-spirited hosing down of those who step forward, we shouldn’t be surprised when the result is that eventually, nobody is willing to speak up.

Before his untimely death in 2012, Tsunami Rangers co-founder Eric Soares and I noticed this disturbing trend and came up with a plan. Whenever a paddler came forward, we would preface our comments by praising them for having the courage to do so, and thank them for sharing their story so that the rest of us could learn from their mistakes. We also resolved to condemn mean-spirited, unhelpful comments. It was a good idea and we could see it working as other paddlers picked up the torch and ran with it, but the internet is a bigger and more unruly place today and that commitment to civility needs a wider following. I hope you’ll join me in helping to promote it.

Note: We examine the Todd Ellison tragedy in greater detail on the National Center for Cold Water Safety website at http://www.coldwatersafety.org under Golden Rule No. 5, Case One.

END_OF_DOCUMENT_TOKEN_TO_BE_REPLACED

For every unmanned kayak reported, the Coast Guard must assume that a person is missing and in distress, and that requires a full-scale search and rescue effort involving Coast Guard personnel, vessels and aircraft.

The Coast Guard estimates a team on the water costs $113,000 per hour.

END_OF_DOCUMENT_TOKEN_TO_BE_REPLACED

It’s May. Do you know what the water temperature is?

Every Spring, warming air entices many people to go out in small boats when the water temperature is still deadly cold. 50ºF water doesn't sound particularly cold or dangerous if you mentally compare it to 50ºF air. 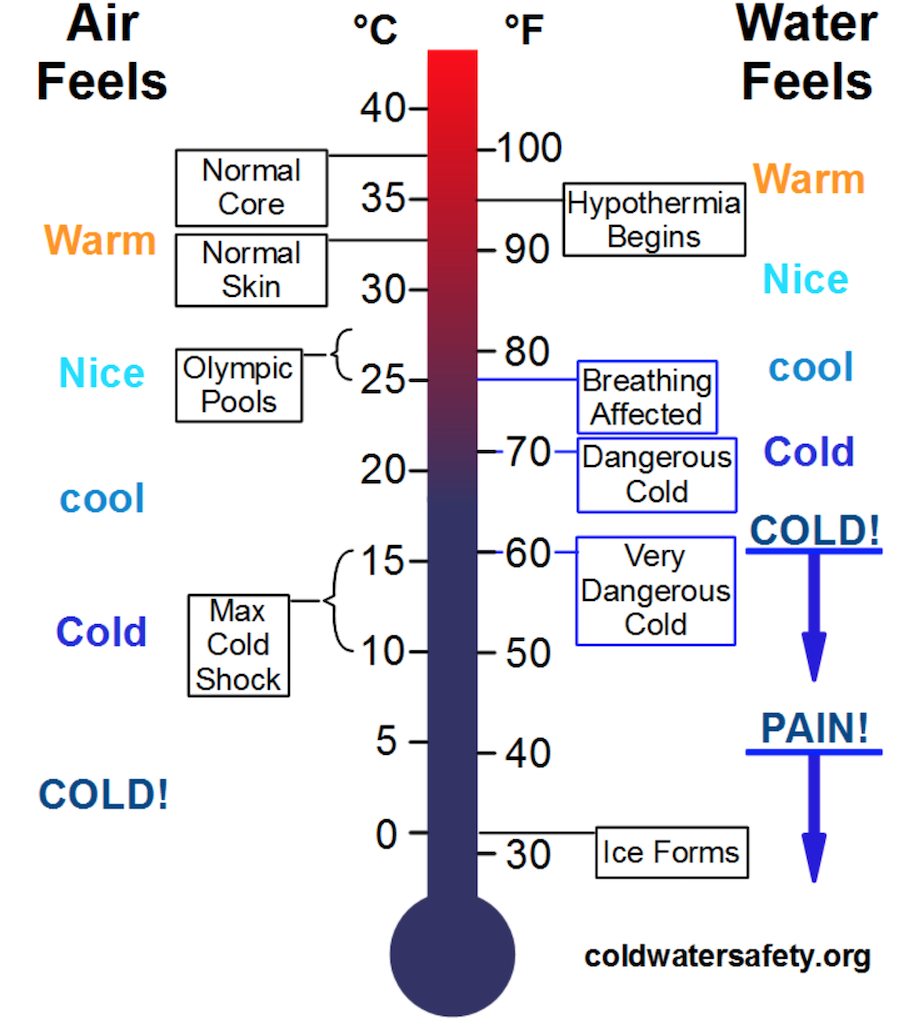 If the combined air and water temperatures are below 120 degrees Fahrenheit, a wetsuit is a must and a drysuit is highly recommended.

END_OF_DOCUMENT_TOKEN_TO_BE_REPLACED

Safety gear that we bring every time we launch our sea kayaks includes a contact tow.

A contact tow is a short tow line set up to perform a wide variety of functions. It is attached to the deck 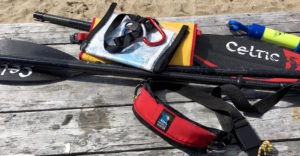 lines in front of your cockpit, where it can be easily reached. It should connect quickly and simply with wide gate stainless steel carabiners. Being able to vary the length of the contact tow line allows you to tow different length boats. As with all towing systems, some method of quick release is essential. A contact tow can be used to tow short distances; it can also be used to bring a boat to a swimmer, which is easier than towing a swimmer to their boat.