Do you know how much of an impact boat color can make on boat speed, performance and stability?

The color of the boat has, in the past, been a personal choice, and largely an aesthetic decision to most boat buyers. Your boat color can make you happy, appreciating your craft whilst it glides across the water; it may make you more noticeable before getting run over by larger water users, or could speed up the chances of needed rescue attention. 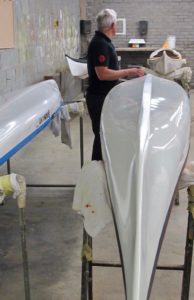 There is now evidence that there is more to kayak color than meets the eye. Boat color could effect our stroke work, making it increasingly difficult to get that perfect roll, or making it tippier than it needs to be. Also, boat color can make your craft slower or faster through the water.

As the Pro Paddler world heats up seeking every advantage, their research has shown that different color pigments weigh more than other colors. Furthermore, color can effect gel structure and hence the friction of the water molecules passing over the vessel.

Progressing through the rainbow color spectrum, it has been found that with two exceptions, boats become increasingly heavier in this order: Clear, Red, Orange, Blue, Indigo, Violet, Black.

How does this knowledge effect our paddling?

This boat sits high on the water, and will fly through it. The paddler will feel that the boat skims 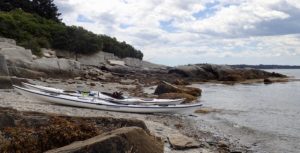 along easily underneath him, and will find it easier to lift his boat on and off a roof rack. However, you need to have a good seat in your boat, as, because you are higher in the water, you will find that this craft is tippier. Watch out for that increased weather cocking as well, as there is more kayak above the water line.

This boat is what is called “well balanced”. It’s known in the trade as the Meecham combination, after its founder. The black hull gives it a stable and solid keel, and so it is much more difficult to capsize than other kayaks. The white deck makes it light on top, further increasing stability, but not adding too much weight overall to the kayak. The other advantage is that it tends to roll easier as the weight change from capsize to upright is such that the boat itself will swing over and want to sit  naturally in its stable, upright position.

“Yellow is the heaviest color that our boats are made of.”  Nigel Dennis

This kayak is about the heaviest and  most sluggish of all of the boats on the market. It is the hardest to lift on and off of roof bars; it takes extra strength to get up to speed, and tends to sink itself through waves. This boat has been the one attributed to the most amount of paddling related hernia injuries.  Athletes use it when training for races to increase their strength and endurance. 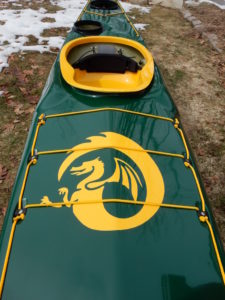 One of the fastest, though not the lightest boat on the market.  This is the reasoning behind many of the British Racing Green cars in the 60’s, 70’s and early 80’s. This was a period when engines were not that powerful and every ounce mattered, so it was the natural color to choose for racing and performance cars. It is more tippy than the white boat, with many of the same properties amplified.  This is a boat color that is recommended for advanced and well balanced kayakers only.

The saving grace of black, heavy boats are that you can put glitter put in the paint.  This acts as a conductor and reflector to heat up the air in the hatches (watch those covers blow up), and this of course makes the boat lighter, hence it sits higher in the water which reduces water friction. These boats are great to use in the daytime and are known in the trade as “solar friendly”.  They lighten the kayak; on a sunny day can bring them up the color scale to white performance characteristics.  They are not recommended for use at night, however, as black becomes heavy when the sun goes down. The only advantage is vastly improved stability as the water line wraps higher up into the secondary. 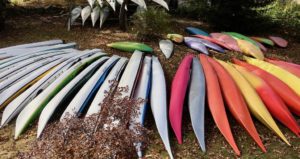 Steve Maynard, BCU Coach 5, while training for rodeo and slalom discovered that certain whitewater/rodeo boats also varied in size by color. His experience was that the black rodeo boats were approximately 10% SMALLER than the exact same boat in yellow. The performance enhancements from this simple color choice are obvious.

It is advisable to  try before you buy.

Posted in Boats and Gear.