When the going gets tough, the tough get this SKUK Classic.

If modern expedition kayaks have a phenotype—that is, a distinctive appearance and characteristics based on a combination of genetic traits and environmental factors—the Explorer may exemplify it best.

The fine lines of the upswept bow and stern, the narrow beam and the clean, functional deck layout are informed by the classic British interpretation of traditional Greenlandic kayaks. From this base DNA, designer and renowned expedition paddler, Nigel Dennis, refined the shape and layup to address the unique challenges of extended journeys on remote, exposed coastlines.

History of the Explorer Sea Kayak

Few other sea kayak designs can boast the expedition pedigree of the Explorer. It has been the kayak of choice for circumnavigations in some of the roughest and least accessible waters in the world: Britain, Ireland, Iceland, New Zealand, Antarctica, South Georgia Island and the Aleutian islands. Twenty-five years after it was first introduced, the Explorer is still handmade in Anglesey, North Wales, and is now sold under the label Sea Kayaking UK (SKUK), formerly Nigel Dennis Kayaks.

I borrowed a shiny new, persimmons-orange-and-white Explorer last summer to better understand the sustained popularity of this mid-sized touring kayak. Along with its devoted following in expedition circles, the Explorer is a staple among elite coaches and at symposia from Illinois to Israel. My testing regimen included a week of teaching intermediate paddling skills, four weeks of self-supported kayak-camping journeys on open waters, and as many surf sessions as the water gods saw fit to deliver.

After a summer on the water, if I had to sum up the Explorer in one word, it would be consistent.

First up, directional stability. The Explorer is designed for covering distance and, as such, it tracks well and is very neutral in wind and confused seas. Weathercocking is minimal, making it easy to hold course with slight edging. When deployed, the skeg works exactly as it should to enhance tracking in high winds. The skeg slider feels sturdy and is well balanced to set-it-and-forget-it on long crossings.

I found it easy to maintain a relatively quick touring speed in a wide variety of conditions, however the Explorer is exceptionally fast with a following sea. Even heavily laden with camping equipment and fresh food for 10 days—including a secret watermelon (more on that later)—I rode effortlessly ahead on the swell while my companions’ boats mired in the troughs.

A useful measure of performance for any touring kayak is a comparison of handling with paddled with empty hatches and with hatches loaded. This is where the Explorer’s versatility and consistency really shine. Whether I was out for an hour or a week, the boat felt responsive to my inputs, carving graceful turns and remaining stable and predictable in sloppy conditions.

Hard chines and a boxy hull profile lend the Explorer more initial stability than you’d expect from its 21-inch beam, making it a surprisingly forgiving companion for novice paddlers. Secondary stability is also very solid, especially with hatches full of cargo. I could roll smoothly into a deep edge to coax tighter turns out of the kayak’s 17.5-foot waterline.

The Explorer may lack the turn-on-a-dime maneuverability of its shorter, more highly rockered sister, the Romany, but it’s no slouch in the surf. The high-volume bow doesn’t dive or deflect easily, which makes for wonderfully controllable rides. The responsive handling meant I was able catch long surfs on three-foot-high faces, even where the wave pattern splintered unpredictably above shallow sandbars. When my concentration faltered and I found myself upside-down, the low back deck and excellent cockpit fit made rolling up easy and uneventful.

The seat is a small, fiberglass dish that suits me just fine for all-day tours. Those accustomed to the sophisticated seat systems found in many of today’s kayaks might find SKUK’s minimalist interpretation offers less leg support.

The Explorer’s keyhole cockpit provides plenty of surface area for secure thigh and knee contact with the deck, without hindering paddler entry and exit. 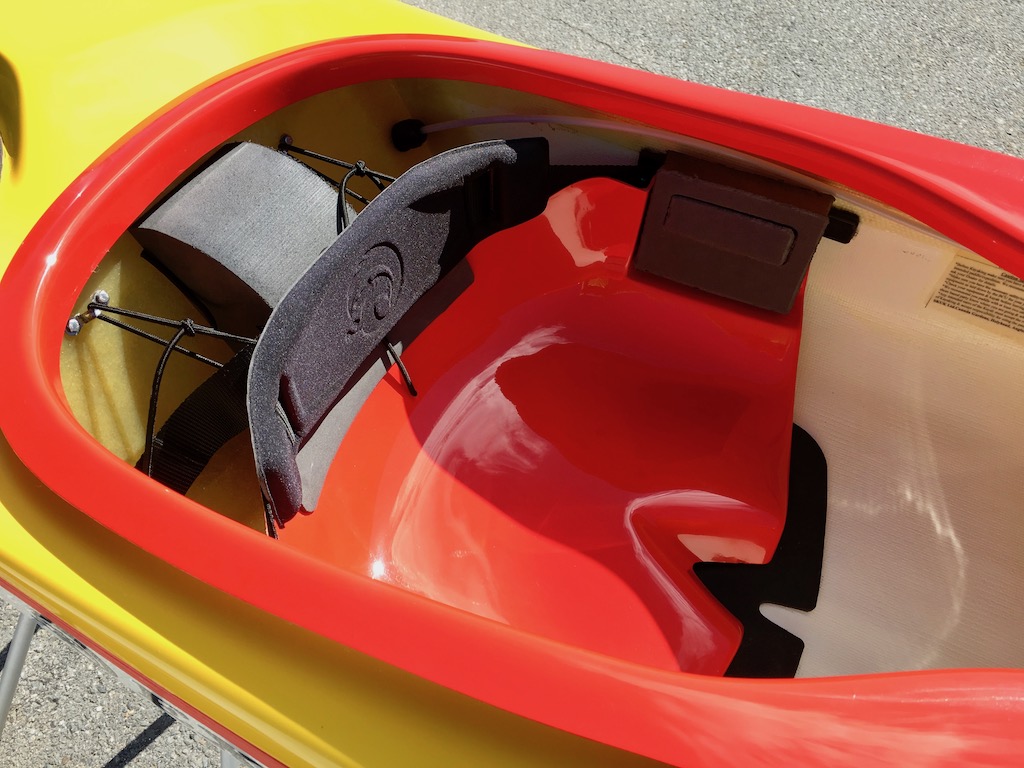 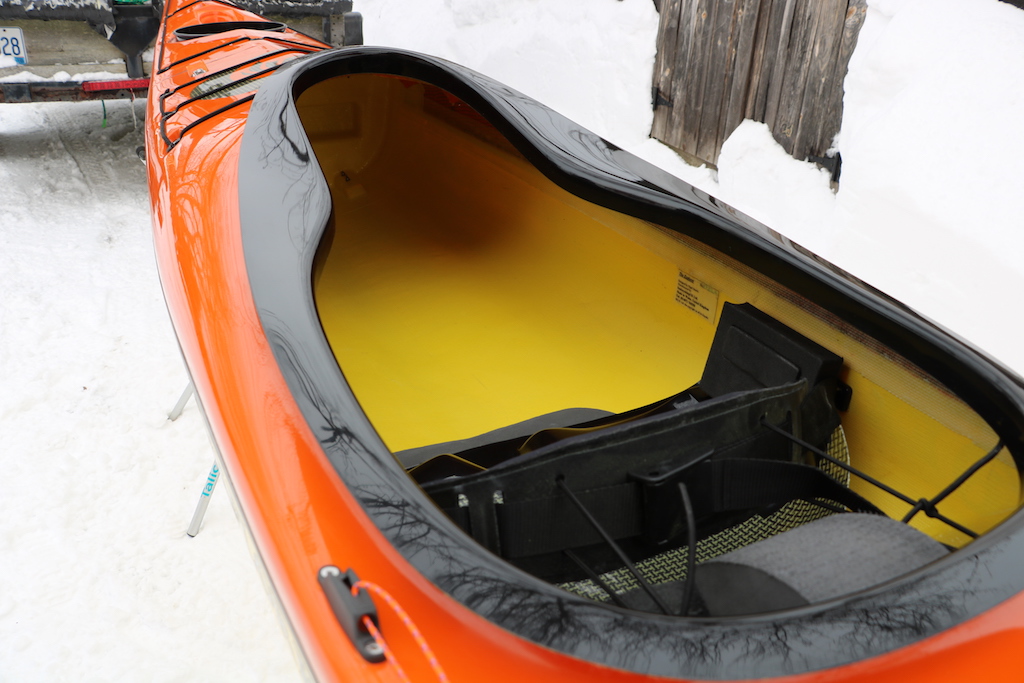 The Explorer accomodates medium-sized paddlers, with plenty of room under the foredeck for larger shoe sizes.

Or a cleverly concealed watermelon. Surprise!

For smaller and larger paddlers, SKUK also offers the Explorer in LV and HV sizes. Volume is removed or added by modifying deck height, so waterline and width are consistent across all sizes.

With 166 liters of storage volume distributed across bow, stern and day hatches, there’s ample space for carefully packed extended trips. More challenging is squeezing bulky items through SKUK’s small, round hatches—I had to leave the Outback Oven and my three-ring binder of kayak lesson plans at the put-in. The upside of these smaller openings is that all three hatches remained bone-dry even after repeated rolling and playing in surf, and the soft rubber lids are very easy to peel off and press on.

Our standard fiberglass layup Explorer employs a relatively heavy, resin-rich construction built to withstand the abuse of expedition paddling. This laminate is also straightforward to repair, as damage tends to be localized around the site of impact. For weight-conscious paddlers, SKUK offers lighter Elite, carbon/Kevlar and hybrid glass-carbon/Kevlar layups.

Whether you’re planning an expedition of your own, or just looking to cover some miles and play along the way, the Explorer is an outstanding performer as you paddle into rougher waters. Its intuitive handling and composure in any conditions ensures all paddlers feel like great explorers.

Posted in Boats and Gear.