On June 5, 2020 President Trump unveiled the decision to ease protections for Northeast Canyons and Seamounts Marine National Monument off the coast of New England, opening it to commercial fishing. Trump made the announcement in Bangor, Maine at a roundtable discussion with commercial fisheries companies and Maine’s former Republican governor, Paul LePage. Maine's Governor Janet Mills was not invited to the event. 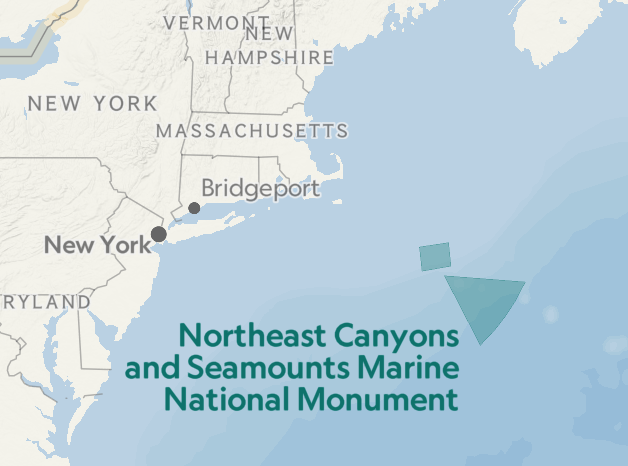 A National Oceanic and Atmospheric Administration photo of corals on Mytilus Seamount off the coast of New England in the North Atlantic Ocean. (NOAA Office of Ocean Exploration and Research/AP)

Selling Off the Future

Miriam Goldstein, the ocean policy director at the Center for American Progress (Cap) was quoted in The Guardian:

"This rollback essentially sells off the future of the ocean and the future of the ecosystem for almost no present economic benefit." She went on to say, "Even fishing done well still has an impact, so for that reason it’s important to have special areas of the ocean set aside. And this has been shown through a lot of science, that it is beneficial to ocean ecosystems, to biodiversity, to threatened and endangered species – and beneficial to those fisheries themselves."

“As a recreational fisherman, it troubles me to see the monument opened to commercial fishing,” Cunningham said. “These are fragile and vulnerable resources, and I am concerned for their future health.”

“Today’s proclamation is another nail in the coffin for both productive fisheries and healthy oceans in New England," Gib Brogan, a fisheries analyst at Oceana, said in a statement in the Washington Post. “By allowing all fishing back in the Northeast Canyons and Seamounts and removing the phaseout of the lobster and red crab fisheries, the hundreds of marine mammals that swim in the monument will be at increased risk of entanglement, including the endangered North Atlantic right whale. And deep-sea coral and sponge gardens that are thousands of years old will lose protection from damaging fishing gear.”

An octopus on the seafloor at Physalia Seamount, in the Northeast Canyons and Seamounts Marine National Monument. (NOAA Office of Ocean Exploration and Research)

Several days later, on June 11, 2020, a supertrawler off the coast of Brighton, England was boarded by government officials. The Lithuanian-registered supertrawler Margiris was found to be operating legally under European laws. Local environmentalists fear it could be endangering short beaked common dolphins and bluefin tuna.

Supertrawlers have earned a bad rep. Many supertrawlers have a patchy legal record; their ability to stay at sea for long periods means they can evade detection, change identities and launder their catch. (See our post, Catch Me If You Can: The Global Pursuit of a Fugitive Ship.)However, supertrawlers making recent headlines in the UK seem to be operating legally, with government-granted licenses.

Supertrawler Margiris fishing in the English Channel, off the coast of Brighton. Photo: SAF SULEYMAN/GREENPEACE.

Generally, a supertrawler is any fishing vessel longer than 130 meters (426 feet). The world’s biggest fishing vessel, the Annelies Ilena from Poland, is 144 meters long: nearly five times larger than a blue whale. While the presence of such vessels is significant, their fishing practices aren't necessarily unsustainable, as long as the biologically safe limit of exploitation for targeted species is known and everyone involved sticks to that limit.

A new 121-meter super-trawler, being built for Russia’s Collective Farm Fishery will have twin-trawling capabilities, allowing it to fish for multiple species at once. It will be able to process fish caught by other vessels, up to 450 metric tons of fish daily.

More critical than the size of the trawler is the kind of trawling it does. Pelagic or midwater trawlers fish for species that live in the middle of the water column, targeting species such as mackerel, anchovies and tuna. Almost all of the world’s supertrawlers are pelagic rather than bottom trawlers. Bottom or demersal trawlers fish for species that live on, or in, the seabed, targeting groundfish such as cod, and crustaceans such as shrimp. Although they are much smaller than supertrawlers, bottom trawlers cause serious damage to the seabed. About 27% of the world's fish catch comes from bottom trawlers.

Bottom trawling is a fishing technique designed to come into contact with the seabed. With its associated risk of permanent degradation and total removal of marine habitats, this fishing practice is arguably the most controversial means of mass-producing food from the ocean. The United Nations estimates that up to 95% of global ocean damage is a direct result of bottom trawling.

Although they are much smaller than supertrawlers, bottom trawlers cause serious damage to the seabed. Photo: Otto Mejía.

Bottom trawling can result in vastly different effects on different types of seabed sediment (such as sand, silt or mud), each with different ecological consequences. Trawling destroys the natural seafloor habitat by essentially rototilling the seabed. All of the bottom-dwelling plants and animals are affected, if not outright destroyed by tearing up root systems or animal burrows. By resuspending bottom sediment, nutrient levels in the ambient water, and the entire chemistry of the water is changed. Resuspended sediment can lower light levels in the water, and reduce photosynthesis in ocean-dwelling plants, the bottom of the food web. The resuspended sediment is carried elsewhere by currents, and often lost from the local ecosystem. It maybe deposited elsewhere along the continental shelf, or in many cases, permanently lost from the shelf to deeper waters. Changing parts of the seafloor from soft mud to bare rock can eliminate those creatures that live in the sediment. Species diversity and habitat complexity are directly affected by changing the physical environment of sand, mud or rock that results from trawling.

Effects of Bottom Trawling, From USGS 2016

For a biodiverse ocean, we need to limit the role of bottom trawling, adapt fishing so that we only catch what we’re targeting, and establish and enforce precautionary, evidence-based catch limits and boundaries. Opening the Northeast Canyons and Seamounts Marine National Monument to supertrawlers that turn their catch into bait and fertilizer will only impede the goal of biodiversity. Sustainable practices and regulations are crucial to the health of our oceans for future generations.